The 7 Steps Of Tequila Making 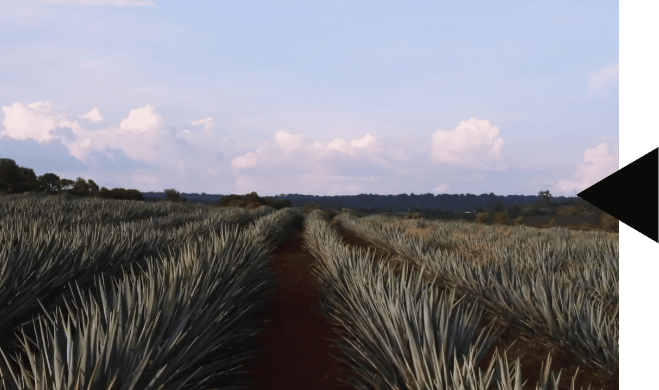 The planting, tending, and harvesting of the blue weber agave plant remains a manual effort that relies on centuries-old know-how, passed down from generation to generation. The agave is grown in our distillery’s fields in the lowlands which have been cultivated for three generations. The plants grow in neat rows for six to ten years and are meticulously tended until they are ripe and ready to harvest.

The harvester, or “Jimador,” removes the agave leaves with a sharp curved tool called a coa. The Jimador trims the 200-plus leaves that protect the heart or piña of the agave until the whole heart is extracted from the ground. Only the heart, or “piña,” of the agave plant is used to make tequila. Mature piñas weigh anywhere between 80-300 pounds; however, the size of the agave heart is not nearly as important as its sugar content. The older the agave, the longer the piña will have to accumulate the starches that will convert into fermentable sugars. Approximately 15 pounds of agave piñas are required to produce one liter of delicious tequila.

During this step, steam injection within traditional brick ovens or stainless steel autoclaves is used to activate a chemical process within the piña that converts complex carbohydrates into simple fermentable sugars. Cooking also softens the piña, making the process of sugar extraction easier.

Once cooked, the agave heads are transported to a milling area for sugar extraction. The cooked piñas are crushed in order to release the juice, or “aguamiel,” that will be fermented. The traditional method is to crush the piñas with a “tahona,” a giant grinding wheel operated by mules, oxen or tractors within a circular pit. Modern distilleries now use a mechanical crusher to separate the fiber from the juices. Once the piñas are minced they are washed with water and strained to remove the juices.

During the fermentation process the sugars are transformed into alcohol within large wooden vats or stainless steel tanks. Yeast may be added to accelerate and control the fermentation. Traditionally, the yeast that grows naturally on the agave leaves is used; however, today many distilleries use a cultivated form of wild yeast. Fermentation typically takes seven to twelve days, depending on the method used.

Our tequila is aged in either French Limousin Oak or American White Oak barrels that have previously been used to age bourbon. Reposados are aged between two and twelve months, Añejos are aged between one and three years and Extra Añejos are aged for over three years. The longer the tequila ages, the more color, and tannins the final product will have. The condition of the barrels (such as their age, previous use, and if their interiors have been burnt or toasted) will also affect the tequila’s taste.

The final step in our tequila making process is bottling and quality control using the most modern, automated techniques. Our bottles are made from high crystal glass and initially rinsed with the given tequila. The bottles are then filled, meticulously hand-labeled with stickers, and packaged in boxes. Each step of the process is overseen by two quality control managers.

Our Process For Tequila Making

In 1761, the Camarena ancestors planted more than 20 thousand agave plants – and for six generations have preserved the tradition and passion for developing the highest quality tequilas. Today, our distillery, Casa Camarena, blends decades-old, traditional techniques with modern knowledge of quality standards to perfect the taste of our tequilas.

Menu
We use cookies on our website to give you the most relevant experience by remembering your preferences and repeat visits. By clicking “Accept All”, you consent to the use of ALL the cookies. However, you may visit "Cookie Settings" to provide a controlled consent.
Cookie SettingsAccept All
Manage consent

This website uses cookies to improve your experience while you navigate through the website. Out of these, the cookies that are categorized as necessary are stored on your browser as they are essential for the working of basic functionalities of the website. We also use third-party cookies that help us analyze and understand how you use this website. These cookies will be stored in your browser only with your consent. You also have the option to opt-out of these cookies. But opting out of some of these cookies may affect your browsing experience.
Necessary Always Enabled
Necessary cookies are absolutely essential for the website to function properly. These cookies ensure basic functionalities and security features of the website, anonymously.
Functional
Functional cookies help to perform certain functionalities like sharing the content of the website on social media platforms, collect feedbacks, and other third-party features.
Performance
Performance cookies are used to understand and analyze the key performance indexes of the website which helps in delivering a better user experience for the visitors.
Analytics
Analytical cookies are used to understand how visitors interact with the website. These cookies help provide information on metrics the number of visitors, bounce rate, traffic source, etc.
Advertisement
Advertisement cookies are used to provide visitors with relevant ads and marketing campaigns. These cookies track visitors across websites and collect information to provide customized ads.
Others
Other uncategorized cookies are those that are being analyzed and have not been classified into a category as yet.
SAVE & ACCEPT
Previous Next
Close
Test Caption
Test Description goes like this